Why is it that an affluent city like Bath can have so many invisible people living on its streets and yet the everyday city life just pass them by without a care or worry? Why, in a city with a growing array of miscellaneous shops and properties lying empty, do we see no action from the local authorities in trying to alleviate a problem which has been around for at least the last three years that I have been documenting the people and the streets of this city?

Surely, it would benefit the city as a whole to deal with the problem of these ‘invisible people’ and to essentially clean-up the image of Bath and help people at the same time, it can’t really be that hard, not when so many properties lie unused and not when millions of tourist bring revenue to this city. This is not a poor city as cities go.

The gentleman in the first image lay under the glowing window of Costa Coffee on Westgate Street for well over an hour yesterday in the rain as people just walked on by, no one knowing if he was dead or alive. It took an age until one kindly gentleman took it upon himself to help, and in doing so others joined the situation and called an ambulance.

Surely, as a society we need to address this situation, and not by boarding-up doorways so that the poor and homeless can’t get some respite from the weather, thats not a solution that’s a reaction. But in ‘really’ dealing with the growing situation of these ‘invisible people’ falling between the cracks – or just lying upon them as it appears in most cases. 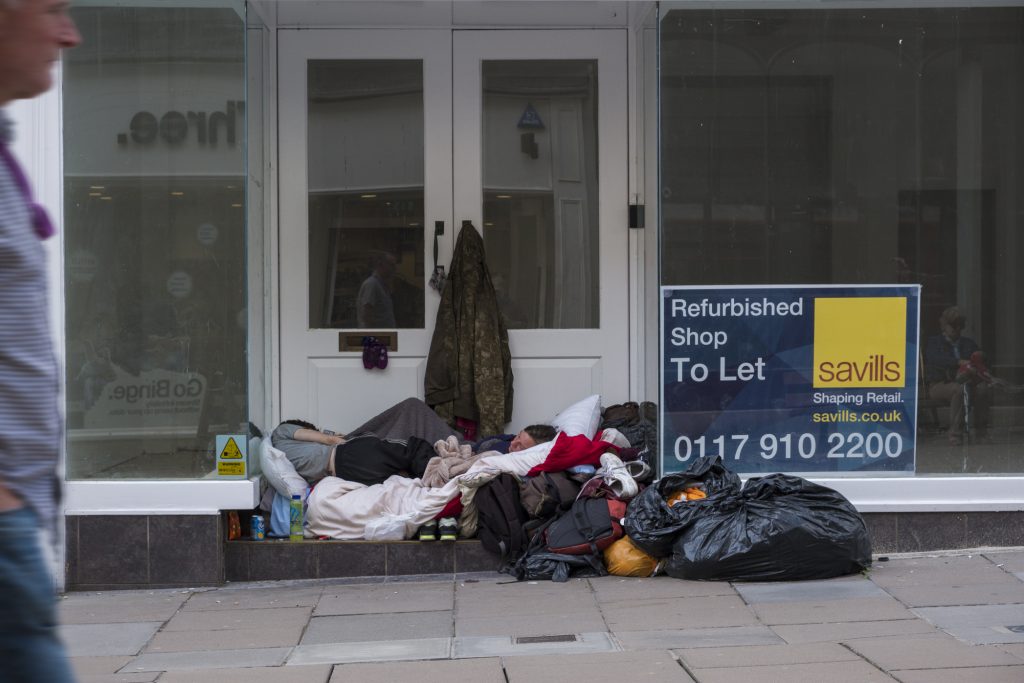 The second image shows a young couple living in a doorway. I have seen them in the same place for weeks now, Strangely living out their existence whilst all the shoppers just idle by. No one seems to care nor notice this appearance of a pop up bedroom in the middle of the street.

Again surely, somewhere within the halls of the local authorities we have a few working souls who job or responsibility it is to help people like this, for the benefits of themselves and then the benefit of the city and its overall appearance. I for one feel most embarrassed that as a community of people living in this city, that we can’t among the wealth this city has in both money, energy and people, that there just has not been a single solution to the growing homeless situation.

Why not temporarily open one of the unused shops as a pop-up refuge or respite from the cold and weather? At least this would both help those in need and help the general look of the city?

I just refuse to believe that with me with my camera am the only one seeing these poor people and this dire situation that just should not exist in a modern and caring city in the twenty first century – or am I wrong?

How, can a city generate such income, welcome so many travellers from all over the globe, yet ignore those in dire need of help, when there are many unused buildings that could at least temporarily shelter from the elements. How can we get the local authorities and the local people to help and put an end to this, it’s just a ridiculous situation that seems to echo the after knowledge of the London Grenfell Towers disaster, and the media hype and knowledge that was shared after the event of the huge amount of unused properties in that area, whilst people lay abandoned living in hotels and hostels.